You are here: Home / Marketing / Nonprofits, Show Your Pride 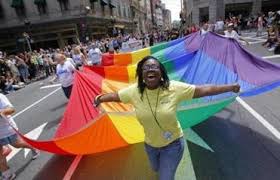 I originally wrote this post BEFORE the horrific shooting at a gay nightclub in Orlando, Florida on June 12. After the fact, it seems even more important for all nonprofits, no matter what your cause, to think about how you are speaking to your LGBT supporters–and how you’re supporting them. DF

Call it “relationship fundraising.” Or call it “donor-centered communications.” There’s even a hashtag for it: #donorlove.

In the nonprofit sector, we have lots of names for the same idea these days. That idea is that there’s only one way to get and keep support for our organizations. We can’t just say we do good work. And we can’t hard-sell our way to success.

We have to make ourselves known to our supporters as the kind of organization they can be proud of.

But how do we learn to do that? How do we find and embrace the people who have chosen to embrace the same cause we have?

Let me tell you a story. It’s the story of how Subaru became the car of choice for lesbians. By the end of the story (which I first heard from Alex Mayyasi in the Priceonomics blog), we’ll begin to see how nonprofits can build relationships with their supporters, too.

Once upon a time, the car maker Subaru was in trouble. Its cars were known as dependable but drab. A new, flashier model had failed miserably in the marketplace. Sales overall were down.

Subaru decided to focus on boosting sales among groups who already liked what it was selling. Those groups included four core groups who were responsible for half of the company’s American sales: teachers and educators, healthcare professionals, IT professionals, and “rugged individualists” (outdoorsy types).

Then they discovered a fifth: lesbians.

Subaru didn’t have to persuade lesbians to buy their cars. “These women were practically commercials for Subaru,” John Nash, the creative director of the ad agency that ultimately made the company’s gay and lesbian advertisements, recalled in 2004.

What it did have to do was to accept lesbian support at a time before Ellen DeGeneres came out, at a time when “don’t ask, don’t tell” was the policy of the U.S. military…when GLBT people were stigmatized. To its credit, it did–and it jumped in with all four tires. The company did focus groups. It hired ad agencies that understood the GLBT audience. And Subaru: 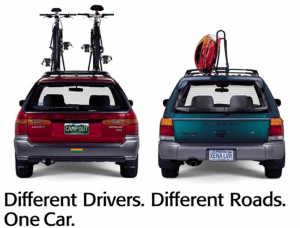 Signal to your supporters that you know what they like

And lesbians bought a lot of Subarus, helping to put the company back in the black.

What Nonprofits Can Learn from Subaru

June is Lesbian, Gay, Bisexual, and Transgender Pride Month in the U.S. It’s a good time for your nonprofit to think: are LGBT people a key audience for our nonprofit? Shouldn’t we be? Are we treating our LGBT clients, volunteers, donors, and Board members as well as a company that just wants to sell them cars?

But your nonprofit can learn lessons from the Subaru story about how to build relationships with any group of supporters.

Whoever your supporters are, show your pride in them. They will return the favor.