You are here: Home / Nonprofit / In the Beginning, Our Nonprofit… 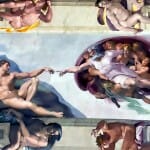 How do you tell your creation story?

One of the stories that nonprofits should know how to tell is what Andy Goodman calls the creation story. This story shares who started the organization, why it was started, and when it was started.

Your staff, Board, and membership can be informed and inspired by the story of “how we got here.” Here’s a creation story that made a difference to me.

When my wife and I came to Temple B’nai Brith in 1990, about half the members were retirees, in their 70’s and 80’s. The other half were people in their 30’s and early 40’s, with almost no one in between. The temple had existed since the early twentieth century, but by the time we arrived, the way it ran was so different, it was essentially a new organization.

We asked the younger generation, “How did you get involved in running a synagogue, in partnership with people old enough to be your parents?”

We liked the people. We liked the building. We started spending time here on Saturday mornings. Eventually, the older generation came to us and said, “Look, we’re not getting any younger–you’re going to have to take over this synagogue.”

That came as a shock. It was surprising enough to some of us that we would even attend a synagogue–let alone run one!

The younger generation got together and decided we would present our elders with a demand they probably wouldn’t accept. We said, “If we take over this synagogue, we’re going to count women and men equally for all purposes. Ritual, membership, voting, you name it.”

The older folks thought a bit and said, “Well we’ve never done it that way before ….” (and we thought we  were off the hook!)

And then they said “…but we know a lot of places are doing it that way now, and we know you young women will take it just as seriously as the men, so…okay. What else do you want?”

And we couldn’t think of anything else! So now, it’s our synagogue. And we love it.

Look at what this story told Rona and me about the organization we were joining.

Because we knew the story, we knew what we were getting into: what we could expect and what was expected of us.

What’s your organization’s creation story? What does it tell the people who work there about why it exists and how they should act in the future?