You are here: Home / Uncategorized / TY Thursday: How to Make a Donor Thank-You Call 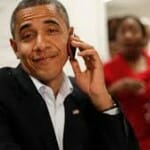 According to Tom Ahern, first-time donors who get a personal thank you within 48 hours are 4x more likely to give a second gift. And you want that second gift, since donor retention rates skyrocket from 22.9% to 60.8% when a donor gives again.