You are here: Home / Fundraising / What Bernie Sanders Can Teach Nonprofits about Fundraising 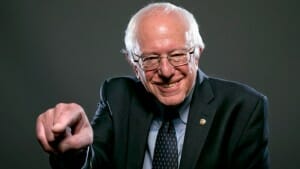 What do you think of Bernie Sanders’ surprising presidential campaign? Whether you “feel the Bern” or not, your nonprofit organization can learn seven lessons from his fundraising–and use them in your own appeals.

The Sanders campaign sent me an email on Wednesday, October 14, the morning after the first Democratic debate in Las Vegas.

Lesson 1: be timely. Ask for support when you and your issues are on people’s minds.

The subject of the email was “We are off and running.” What a positive tone! Who wouldn’t want to be part of a campaign that was already “off and running”?

Lesson 2: be positive. People want to give to success.

The salutation of the message said “Dennis.”

Lesson 3: call your supporters by name. If it said, “Dear friend,” I probably would have deleted it then and there.

Lesson 4: help your donors feel they are part of something bigger. When I give, I don’t want to be a lonely outsider. I want to feel that I’m part of a movement making change.

A big piece of the email was quotations from Sanders supporters who watched the debates together. In fact, the subject line of the email–“We are off and running”–came from one of those supporters, Diane in Colorado.

Lesson 5: give your donors a voice. Make them feel it’s not about you, the organization–it’s mainly about them.

The “ask” included in the email was clever. “Your contribution of $25.55 — the average donation we’ve received this week — will help us continue to build a movement that will win the White House for the people.”

Lesson 6: ask for a specific amount. Seeing that amount, if I thought of donating $25, I’d probably raise it to $30, just so as not to be below average!

All in all, the email echoed Sanders’ campaign theme that building a movement to oppose corporate power with people power is more important than any specific candidate.

Lesson seven: make your fundraising consistent with who you are. People say about Bernie Sanders, “He’s always stood for the same things.” Make sure they can say the same about your nonprofit and its communications.

Have you received an especially good fundraising appeal from Hillary Clinton, Marco Rubio, or some other candidate? What did they do that you could do too?