You are here: Home / Nonprofit / Thank-You Thursday: Make It Personal 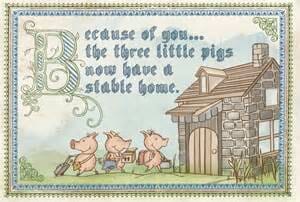 Tell a story to show the difference the donor made

Previously, I told you how Global Giving made me decide to renew my donation for Nepal earthquake relief, only one week after I first gave. They won me by telling me the impact my donation is already making.

I’m a junkie for that feeling of making a difference! And I’m not alone.

But what’s the best way to make the impact of their donation seem real?

Northeastern University told my friend Amy Wyeth the impact her donation made. Or more exactly, Nicole Bourque told her.

Nicole is a Northeastern student who dreams of becoming a Physician Assistant. She called Amy on the phone, thanking her for her donor renewal. She followed up with an email, and told Amy her story.

“I grew up in a small town in southern New Hampshire, where people watch out for one another,” Nicole said. At the university, she was president of a student body that drew attention to the ways our health system serves some people better than others. In her career, Nicole plans to bring primary medical care to communities that don’t have enough healthcare.

Nicole thanked Amy personally for the chance to attend the university.

Without the financial support of donors like you, many of the scholarships I received would not exist. And I would not have been able to pursue my education here.

Amy was impressed. Wouldn’t you be? Here is a real person, feeling the impact of Amy’s donation right now, and thanking her. What better proof could a donor ask for that their gift was making a difference?

Don’t Wait for Next Year

What’s the best story you know that shows donors how they’re making a difference?