You are here: Home / Nonprofit / Fundraising Tuesday: Goldilocks & the 3 Nonprofits 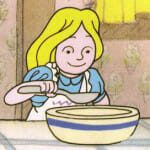