Did your nonprofit raise the money you hoped to raise at the end of the year? If so, congratulations. But if not, maybe it’s because the donor never read your letter.

What Other Nonprofits Do with Envelopes 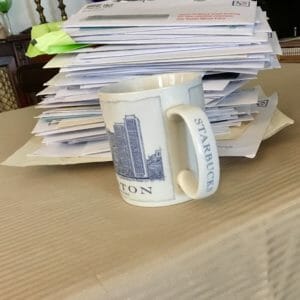 In November and December, I received over 100 appeal letters from 72 different organizations. That’s a lot of mail! And nobody has the time to read all the appeals they receive.

Donors figure out whether or not to toss your appeal in the recycling bin in seconds. They do it by looking at the envelope.

Most of the appeal letters I received did something on the front of the envelope to persuade me to look inside.

When Brittany went looking for like-minded veterans, she found About Face.

We need you. This is a time for action–not for standing on the sidelines. (from J Street)

Even the envelopes that say only “Immediate Attention Requested” make me think a moment longer…and that means I’m more likely to rip them open and see what’s inside. As you want me to do!

6 Ways Your Envelope Could Stand Out

You could mimic the other nonprofits to give yourself an equal shot at  your donor’s attention. But here are six ideas to make your envelope pop out from that tall stack of envelopes I showed you.

Every Tuesday in January and February, we’re  going to look back at those 102 appeal letters I received–and look forward to what you can do better this year. Stay tuned to Fundraising Tuesdays on Communicate!