Jane Austen was one of the most beloved authors of the 19th century.  She wrote all her novels by sitting in company and paying attention to what people said.

Her dialogue sparkles: it sounds like real people talking, and with every word, they reveal what they care about and who they are.

Be like Jane Austen. Before you start to write, listen. On social media, in person, every way you can: find out about your audience and what  moves them.

That way, people will want to read your nonprofit’s messages! 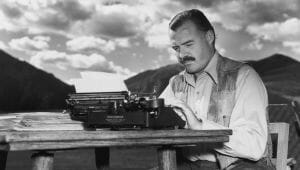 Ernest Hemingway was one of the most read authors of the 20th century. When he sat down to write, he chopped away adverbs, adjectives, and description. He told the whole story through dialogue and action.

Be like Ernest Hemingway. Whether you’re writing a newsletter, blogging, using social media, or asking for money, be brief. Leave out everything your audience doesn’t care to read. (There’s an app for that!)