You are here: Home / Uncategorized / TY Thursday: Don’t Take Your Donors for Granted 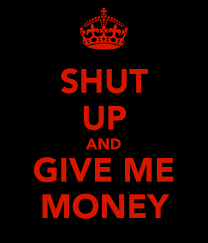 Sometimes I think nonprofits have an invisible sign above their desks, directed to donors:

How else do you explain the way we keep on writing donors the way that’s most convenient for us, and not for them?

Or the way we persist in asking them for a new donation before we’ve actually said “thank you” for the old one?

For more shake-your-head proof that we are taking donors for granted–treating them like cash machines and not like human beings–consider this pet peeve from my friend Carol.

A First-Time Gift is Not a Wedding Ring

I had an experience of giving generously to an organization and then realizing that my impulse was one of very poor judgment in terms of my financial situation.  Subsequent mail from the organization has basically asked me where I am and to send money in the same amount as soon as possible as the funds are very much needed.  Very poor form! I have been tempted to send a note but have decided that silence is the better option.

From the organization’s point of view, it seems, they’ve been jilted. Carol made them a vow of lifelong devotion, and then she left them at the altar.

But Carol doesn’t see it that way. She made a gift. Did that commit her to making the same gift happily ever after? Certainly not–particularly if she couldn’t really afford it. And she is offended that the organization is holding her to a promise she never made.

I bet you have some Carols on your list of lapsed donors. They, too, have decided “silence is the better option.” You might feel they have abandoned you, but they believe you have a lot of nerve to think they owe you.

How Not to Take Donors for Granted

Fortunately, some of us do understand how to woo our donors. Carol adds:

A different organization with similar goals has been nothing but kind and appreciative. After getting a request following my increased donation amount to another arm of the organization, I noted that I already donate to that program and had just increased the amount.  I received a note to the effect that the mistake had been corrected, with thanks for my being of such support.

This is also a group that initiated a meeting for me with a regional director after I was unable to attend a local event for which I had registered. We had a lovely dinner with pleasant conversation, including an update on several programs–no pressure of any kind, just a learning experience and a getting to know you evening.  One certainly catches more flies with honey and the personal touch.

Taking donors for granted is destroying their good will. Treating your donors right is the best thank-you. What are you doing to make your donors feel they’ve truly been thanked?