You are here: Home / Fundraising / TY Thursday: Gratitude–It’s a Gift

The first step your nonprofit ought to take to show your gratitude to donors is sending out the ideal thank-you letter, within forty-eight hours of receiving the donation. That will already make your donors happy.

The second step is to make a plan to thank the donors throughout the year. Beginning with a welcome packet, and continuing with reports that show the impact of their donations throughout the year, you can make donors glad they gave and eager to hear from you again.

What about sending donors a gift in return? Is it a good idea to include a premium when you ask (or to reward their donation afterward with something tangible)? Or not? 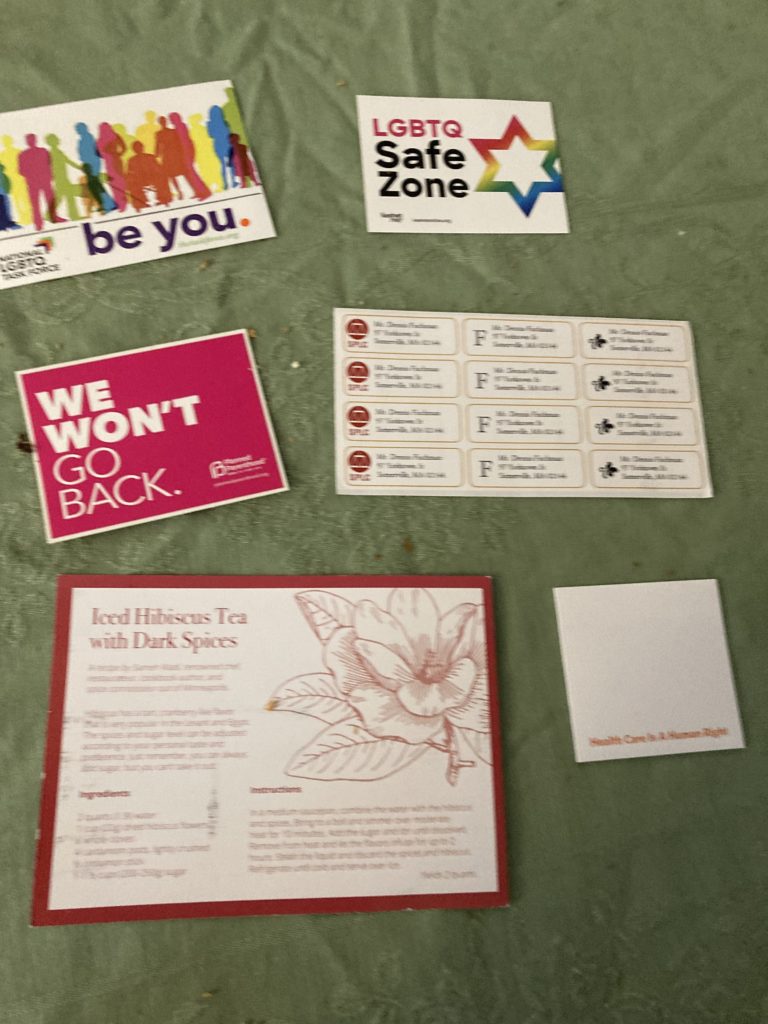 The Gifts I Got For Giving

Judging by my mail, many nonprofits think including a good way to say thank you–sometimes, in advance–is by giving me something I can use.

Women to Women International has plied me with multiple gifts: a notepad, a set of cards and envelopes, and even offered me a handmade friendship bracelet made by a woman in Rwanda (in return for a gift of $20 or more). 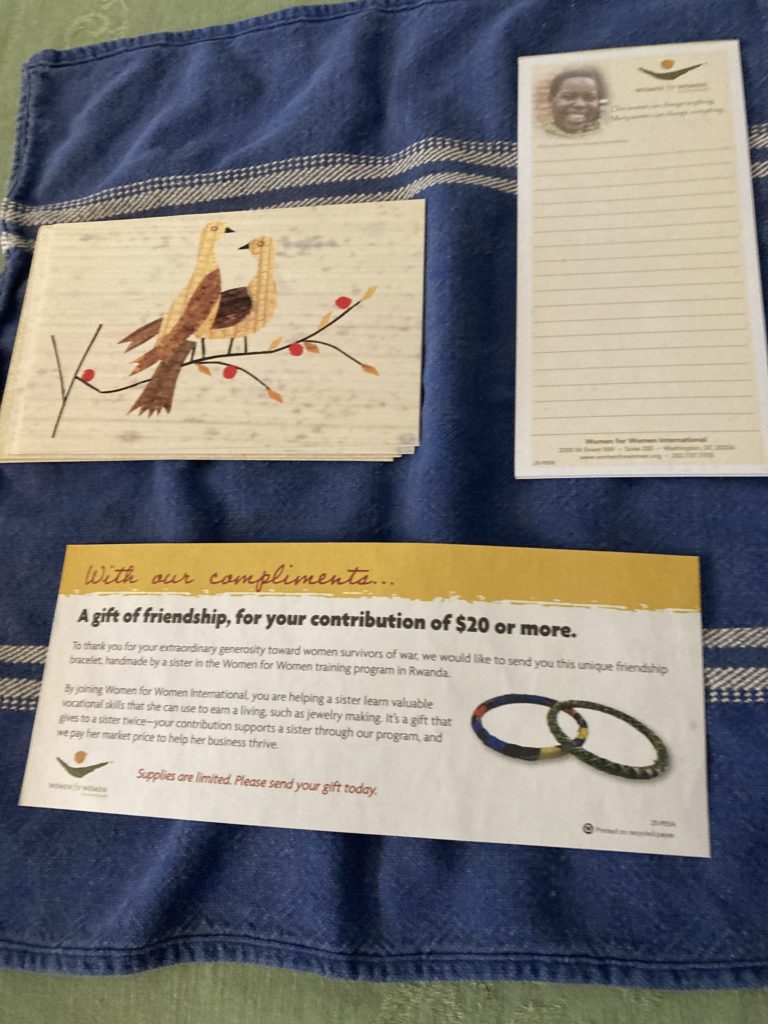 It’s worth noting that I’ve only ever given to about half of these good causes! Clearly, for my wife and me, expressing gratitude through premiums is not a useful fundraising tactic.

But are we typical that way?

The Psychology of Getting Paid

There’s a famous psychology experiment in which two sets of participants are asked to do exactly the same tasks. The only difference: Group A are told they’ll be paid a small amount for doing the work. Group B are doing it for free.

After the task is done, the psychologists ask: How interesting did you find the tasks? Do you think they were useful? Would you be willing to do them again?

The answers are extremely relevant to us as fundraisers!

The paid group found the tasks less interesting and less useful than the group who did the work for free. The paid group were also less likely to want to do the work again in the future.

Why did getting paid make a difference? The psychologists believe that Group A told themselves a story about the tasks: “I’m just doing it for the money.”

Group B wasn’t getting paid, so they had to come up with a different explanation. They found something interesting and worthwhile about the tasks–because surely they wouldn’t be doing something that was boring and without purpose!

Do donors look at giving the way these participants looked at their tasks? And if so, which story do you want donors to be telling themselves about your organization?

I gave for the note cards (or bumper sticker, or bracelet). I don’t really support the organization all that much. I might not give again unless they make me a better offer. or

I gave because something about this organization moved me. They’re the kind of group I support, and so I might give again, the next time they ask.

The choice seems clear. But what do the experts say?

Do Premiums Help You Get & Keep Donors?

“Organizations believe that offering thank-you gifts increases charitable donations, but they actually reduce donation amounts,” says George Newman, assistant professor of organizational behavior at the Yale School of Management. (Therefore, Jay Love of Bloomerang recommends you spend your money on staff time to call and say thank you, instead!)

On the other hand, “Premiums can drive significant, incremental fundraising success in donor acquisition, reactivation, and retention programs,” according to Michael Kulpinsky of Innovaire Communications. “Premiums that offer strong mission-based tie-ins worked the best.”

Neesha from Causevox wants you to remember that last point. “Extrinsic fundraising gifts make people feel selfish,” she says, and you want them to feel generous. “Don’t use them as an incentive for first-time givers or to people who are not actively involved. You’ll be encouraging a bad habit.”

Instead, if you do use premiums to show gratitude to donors,  give them “goods that reflect the direct impact of your work.” Like that friendship bracelet from Women to Women I mentioned, or “a personal letter from a child who you sponsored for her education.”

My expert opinion? If you are a smaller nonprofit, there are other ways to express your attitude of gratitude that you should start doing today.

Gratitude Can Be a Gift in Itself

The message on the outside of the bold blue envelope read, “Your Certificate of Appreciation is enclosed.”

Look at what I saw when I opened the envelope. 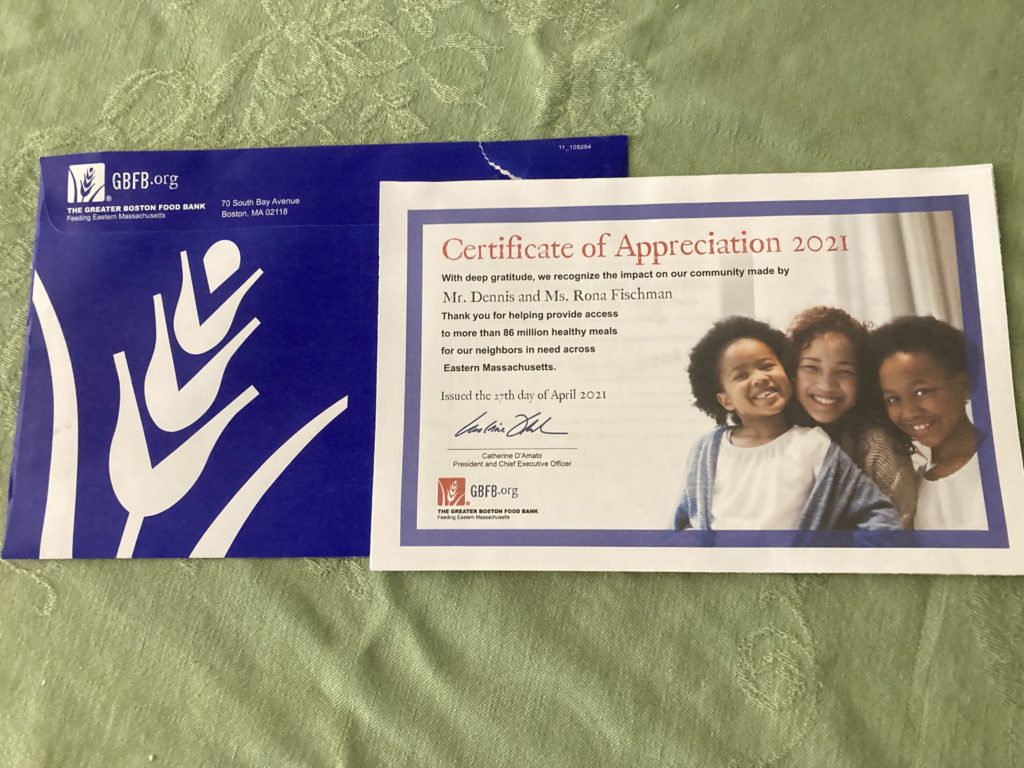 It’s an actual certificate, like one you might put up on your wall. It’s signed by the President of the Greater Boston Food Bank, Catherine D’Amato. It uses a photo of three smiling faces to make Rona and me feel good about what we gave.

And right under the title, it actually says, “With deep gratitude.”

Even if I don’t hang it on a wall–even if it goes into the recycling bin–this piece of paper makes a greater impression on me than all the return address labels in the world.

And it doesn’t make me feel like I got paid for giving. It makes me feel I was thanked.