Thanking your first-time donors turns them into repeat donors.

Thanking your repeat donors turns them into loyal supporters.

Thanking your loyal supporters makes the lifetime value of their donations multiply. It’s the most important thing you can do to improve your fundraising!

Here are your favorite posts from 2021 about expressing an attitude of gratitude and #DonorLove. Please write me back and tell me which of these you are going to put into practice in 2022!

Recurring donors give automatically. When you thank them, though, it should be anything but automatic. You need a deliberate and thoughtful approach to showing donor love to this special group.

TY Thursday: Your Board Will Thank You for Doing This

Getting thanked by a Board member helps donors think, “I made a good decision when I gave.” But it helps your Board of Directors, too.

TY Thursday: A Toast to You, Generous Donor!

The essence of a toast is not the liquid you drink. It’s the words you say. What can you say to make your donors feel extra special–right now?

A welcome kit (also called a packet or package) tells the donor, “You matter to us. You’re not just a cash cow. We’re in this together for the long haul.” What should go into a welcome kit?

Why is it so important to welcome new donors? The first time a person gives to your nonprofit, she is waiting to see how you will respond.

If you say thanks and then forget about her, she is likely to do the same to you.

In fact, she may even experience donor’s remorse, the philanthropy equivalent of buyer’s remorse: “Why did I give that money to that organization? What was I thinking?”

But if you thank her in multiple ways, she will know why she gave. And one of the best ways to say thank you is to recognize a first-time donor, as personally as you can, and to welcome her onboard.

Here’s a Great Example of a Welcome Packet

My wife and I recently made a first-time donation to BAGLY, the Boston Alliance of Lesbian Gay Bisexual Transgender Queer Youth. Here are some of the ways they made us feel welcome, right from the start.

The envelope they sent the welcome packet in was more of a greeting card size than a business size. It had a live stamp. And someone had written our address and the return address by hand, in purple ink.

The letter inside called us by name. It said “Thank you for joining us,” recognizing the first-time gift. It told us about a new program our donation would help launch this year, to help LGBTQ+ youth avoid homelessness. And it offered us ways to get involved, from emailing the Director of Development to following them on TikTok.

As if that weren’t enough, the packet included: 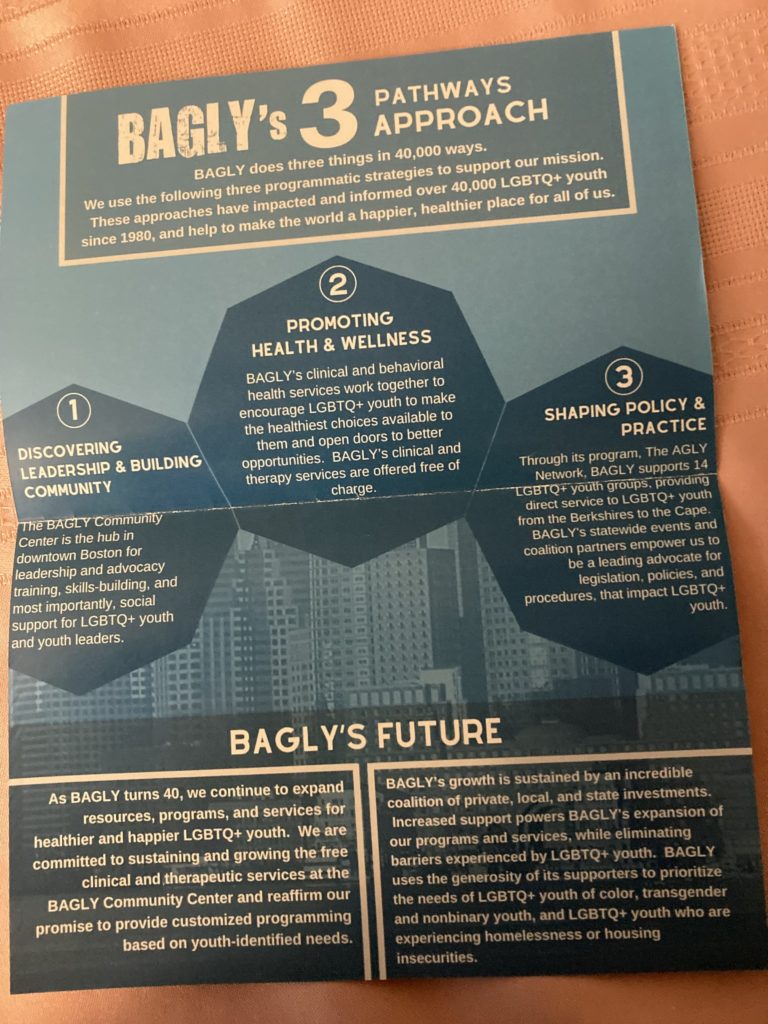 There is no chance that a donor who receives this welcome packet will ask, “Who is this organization again? Why did I give them money?”

Instead, they will say, “Wow, I knew they were worthwhile but I didn’t know all that about them! I’m glad I gave! Now, what’s this TikTok thing?”

What will first-time donors say to themselves about your nonprofit? Send them an excellent welcome packet to make sure it’s something great.

Does every donor who gives to your nonprofit really intend to give to you? Chances are, the answer is no!

I am not talking about the donor who meant to give to Connexion in Massachusetts and mistakenly sent a check to Connections in Texas. That kind of mistake is rare.

Nor am I talking about the person who hit Donate on your website when they didn’t mean to. On most websites, the donor has to take a few steps before giving–sometimes, too many!–and that provides them with the chance to reflect.

I’m talking about the donor who knows the gift is going to your organization but doesn’t so much care about your organization as about something that you do. And make no mistake: there are a lot of donors like that.

So, how do you thank them?

They care about their friends

Have you ever seen one of your loyal supporters start a Facebook fundraiser for you? Maybe for their birthday, or some other special occasion, Kelly Padilla asks her friends to help her reach a goal of $500…to benefit you.

Let’s say Kelly reaches her goal. Great! You have a little money you didn’t have before. But what you don’t have is a whole new set of donors: because they didn’t give to support you, they gave to support Kelly.

That’s true whether Kelly raises funds for you online, runs a charity race, buys a table at your gala, or even holds a house party. It’s true whether the gift is for her birthday, in honor of her retirement, or in memory of her mother who passed away recently.

They care about a program and the people it serves

There are lots of occasions when a donor gives because they like a particular program of yours but wouldn’t have been moved to give to the others.

This happens often in crises. After the earthquake in Haiti in 2010, for instance, I gave to an international NGO for Haiti relief. When they stopped letting me designate my gift for Haiti, I stopped giving to them. The others may have been worthy, but they were not what I meant to support.

Even on an everyday basis, donors may like one part of what you do more than others. I know it hurts to realize that. You have no black sheep in your nonprofit family. They’re all your babies! But a donor has a different relationship to them.

Your donors may not call you saints or communists, but they know whether they want to give food to the poor or challenge the system that creates poverty. It’s one of those goals that they care about: not your whole organization.

They care about a program you sponsor

Recently, I receive a wonderful thank-you in the mail. It included a personal note from the Development Director; her business card; and a brochure, a newsletter, and an annual report, all beautifully illustrated with photos in color.

The puzzling thing? I didn’t remember giving to the organization!

It turned out that I had given to a couple of smaller groups of incarcerated and formerly incarcerated women who relied on this umbrella organization for fiscal sponsorship. The name of the larger organization showed up on my credit card statement. It did not stick in my memory.

Because it was the women I cared about–not their fiscal sponsor.

It’s a really good idea to thank every donor, even if in some cases you are unlikely to hear from them again. We know statistically, for instance, that people who give in memory of a friend’s mother who died this year are unlikely to give again next year. And few of the people who gave to support Kelly’s birthday fundraiser will become repeat donors, when you ask.

So, what can you do to give your nonprofit the best chance of building relationships with donors who might not care about your whole organization?

Because if they don’t mean to give to your organization yet, treat them right, and maybe you will earn their loyalty.