Nothing matters more to your donors than getting their name right.

Don’t just take my word for it. Ask other experts in nonprofit communications, and they’ll tell you the same thing. Or ask the donors. You’ll get an earful about how annoyed they get when a nonprofit is happy to take their money but can’t be bothered to remember their name!

It can be simple to call the donor by the name they prefer. If you have a good CRM, it will offer you fields where you can enter the full name of the donor plus the name they’d like you to use in the salutation of your appeal letter (or the To: line of your email).

But first, you have to find out the right name.

How do you do that? Ask.

Ask about Names When You Ask for Donations

When BAGLY, the Boston Alliance of Gay, Lesbian, Bisexual, and Transgender Youth, asked for money, they included this language on their donation card.

Did we spell your name or address incorrectly?

We’re so sorry. We try to maintain an accurate database of our supporters, but we need your help on this one.

BAGLY is quietly allowing people to say “My name is Albert, but you can call me Al” or “I used to go by Sarah, but now my name is Carter” without making any fuss about it.

Ask about Names When You Say “Thank You”

Keshet, the organization for LGBTQ equality in Jewish life, found another good way to ask which names to use. When they thanked us for our donation, they checked how my wife and I would like to be listed in their annual report.

As I said when I congratulated them in a post in 2020: “Keshet asked what we wanted to be called. They saw the way the names were listed on the check we’d sent them, but they didn’t assume that was exactly how we wanted our names to appear.”

Because everyone knows what happens when you assume!

Ask about Names and Give the Donor Control

It’s probably no accident that the first two examples came from organizations that serve the LGBTQ+ community. Names given and names chosen matter enormously to queer people, especially people who have made a gender transition. These organizations know that and tacitly act on their knowledge. But all nonprofits should follow their lead.

Just recently, I saw a different approach from an organization that is not specifically LGBTQ+, one that impressed me. Jews for Racial and Economic Justice (JFREJ) emailed me to let me know that the control over my name was in my own hands.

Here’s why they made the effort:

We know how harmful misnaming is and we want to do everything in our power to not do it. We want to thank those of you who have come forward and spoken up about the harm being misnamed causes in our community, especially for our trans, gender non-conforming, and non-binary members.

Here’s what they did:

“The heart of JFREJ’s new policy is our self-reporting portal which gives you control over your personal data,” they told me.

When you click on the link, you will be asked to submit the email address we have on file for you (i.e., the email address that this email was sent to). You will then be emailed a new link, which will show you the private information we have on record for you and will give you the opportunity to change any or all of it, including your name, phone number, address, email, and recurring donation.

You can make those changes any time. Your data, your choice.

And if the portal doesn’t work for you, and you prefer to update your information by connecting directly with a human, you can email our Development and Database Associate at [email protected]. He’ll kindly take care of it for you, anytime.

And here’s why you should consider doing the same!

As we’ve seen over and over, names are personal. Getting a person’s name wrong sends the message that you don’t care who they are, as long as they give your organization money. That’s a slap in the face to anyone who’s fought for their identity, and it’s insulting to anyone, period.

Names are not just an LGBTQ+ issue, any more than curb cuts in the sidewalk are just a wheelchair user issue. The curb cuts make it easier for everyone to get around: workers carrying loads, parents pushing strollers, grandmas using canes or walkers, people whose legs are tired that day!

If you give everyone control over how their names appear in your database, it’s like installing curb cuts. Pretty soon, everyone will use them, and the only thing that people will notice is the backward thinking groups who have stopped them short, by continuing to call them the wrong name. Don’t be that group!

Does it really matter when you get a donor’s name wrong? Just ask the donors.

On my personal Facebook page, I put up last week’s Communicate! blog post, Fundraising Tuesday: Using Your Database to Get the Name Right. And then I asked, “I’m just curious: have YOU ever been asked for money by a group that couldn’t get your name right?”

Meg said firmly, “*All* the time. I get mashups of my mother’s name (Mary Kay) and mine now too.”

Doug said, “For some reason, the DNC thinks my name is Cecil.”

From a friend whose last name is Crary: “Happens to me all the time. For some reason, my last name defies logic or something. I particularly love when it autocorrects to ‘crazy’.”

From a friend whose first name is Pam: “I get a fair number of things addressed to “Vam,” which I finally realized is what “P” looks like when I’m writing quickly.”

Marla tells me her name is now Maria. “Say it soft, and it’s almost…🙏”

Lois says, “😂 All the time. I keep an envelope of misspelled names.”

Helene says, “I’m actually amazed when they get it right.”

How does it make donors feel to be misnamed?

I said to my Facebook friends, “Thank you all!” (Because thank-you’s are almost as important as getting names right.) And I asked,  “Here’s a follow-up question for you: what would you like the organization that sent you that piece of mail to know about how you react when you see it?”

Meg: That they should hire enough staff that they have time to get things right – and pay enough to get good people.

Lois: I probably wouldn’t say it 🙂. Meg: And they’d probably attribute your opinion to Louis  anyway. Lois: If I were lucky!

Why would you ever make donors feel dissed? 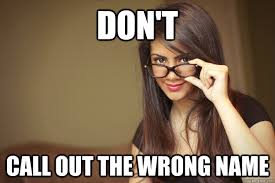 You are out there asking donors to give you their money, in a year when many of them either lost their jobs, made a lot less, or helped their families and friends in need.

You are asking at a time when every other nonprofit in the country, and sometimes, other countries, is asking for them to give as well.

If you have done a good job up to this point, the donor understands why giving to you might make a difference toward a result they care about a lot.

Why would you spoil all that by being inattentive to their names?

Now, you might get lucky. One of my friends, Jerry, told me:

So we just received a double first name solicitation envelope [like the “Mr. Rona Dennis” envelope I received!] from a national org that we have supported for years. I decided to write to them just to see what would happen. We received an emailed apology within the hour, and they said that a data input error was the reason, and promised to fix it. I thanked them and asked if there was a way to reduce the frequency for paper mailings. They do good work, so we will still support them.

It’s not so hard. Just be sure to get the names right. Jerry, Meg, Lois, Sandy, Helene, Marla, Pam, Laura, Doug, Lauren, Lee, Rabab, Dmitry, and I are all here to tell you: it makes all the difference in the world.

My wife’s name is Rona. My name is Dennis.

There is no one at our household whose name is “Mr. Rona Dennis.”

Yet that is the person the United Way is asking for money.

Why it’s crucial to get the name right 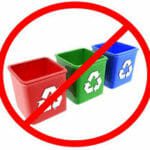 As a nonprofit fundraiser, when I see a mistake like the one the United Way made, I shudder. Why? Because I know that the average donor will see that envelope and throw it away.

People’s names matter to them. It’s vital to get the name right. If you mess up on the name, you are saying to the donor, “I have no idea who you are, and I don’t care. You don’t matter to me: only your check.”

Even a dear friend letter will get tossed, unread. But that’s presuming the donor has actually opened the envelope to see the salutation. If the name on the envelope is wrong, whoosh! Into the recycling bin it goes, no matter if you wrote the ideal appeal letter and tucked it inside.

How to make sure you get the name right

Instead, though, someone put “Rona” in the First Name, then skipped to the next field, Last Name, and put “Dennis.” They didn’t double-check, and they didn’t ask themselves where “Fischman” was supposed to go. Enter the street address, city, state, and zip. On to the next set of data to enter!

You can do better than that.

Just take an extra moment before you save the entry to double-check it.

Otherwise, the recycle bin is waiting!