Thanking your first-time donors turns them into repeat donors.

Thanking your repeat donors turns them into loyal supporters.

Thanking your loyal supporters makes the lifetime value of their donations multiply. It’s the most important thing you can do to improve your fundraising!

Here are your favorite posts from 2021 about expressing an attitude of gratitude and #DonorLove. Please write me back and tell me which of these you are going to put into practice in 2022!

Recurring donors give automatically. When you thank them, though, it should be anything but automatic. You need a deliberate and thoughtful approach to showing donor love to this special group.

TY Thursday: Your Board Will Thank You for Doing This

Getting thanked by a Board member helps donors think, “I made a good decision when I gave.” But it helps your Board of Directors, too.

TY Thursday: A Toast to You, Generous Donor!

The essence of a toast is not the liquid you drink. It’s the words you say. What can you say to make your donors feel extra special–right now?

A welcome kit (also called a packet or package) tells the donor, “You matter to us. You’re not just a cash cow. We’re in this together for the long haul.” What should go into a welcome kit? 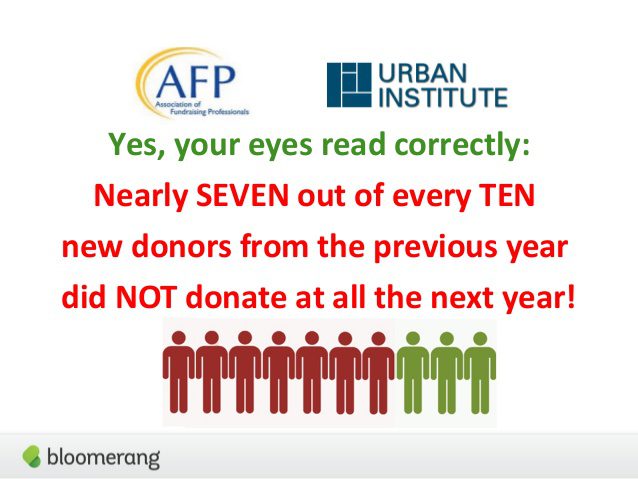 You have a new donor. Congratulations! But if you do nothing, chances are more than two out of three that they will never give to you again.

Renewal donations are even less likely if they didn’t give to you in the first place: they gave to their friend’s fundraising campaign. That donor has not gotten to know, like, and trust your organization.

Leave them alone, and they never will.

So, what can you do to win over that kind of donor? One thing that works, sometimes, is giving them the chance to get more involved right away–in the thank-you.

How the Innocence Project Thanked Me

The Innocence Project is an outstanding organization, but it hadn’t been on the list of groups that receive donations from my wife and me. Until this year. Then, a friend asked us to support the group to celebrate her birthday, and we did.

Here’s the thank-you email we received:

Thank you again for donating to the Innocence Project. Your contribution will go directly towards fighting to free innocent people, advocating for reforms that can identify, rectify and prevent wrongful convictions, and supporting exonerees as they rebuild their lives.

But there is so much more to do, and many more wrongfully convicted innocent people counting on us to do this work. Stay in touch and join our social community on Facebook, Twitter and Instagram too.

What They Gave Me, What You Can Give Donors

First, the Innocence Project gave me something valuable without any further ado: they gave me reasons to believe I’d done the right thing.

But then, they invited me to “join our social community.” Note that wording! I’m not following them. I’m becoming part of a larger group. Now, of course that means I will hear more messages from the nonprofit, but it also means I will add like-minded people to my social media feed–new friends I probably could not have found by myself.

If I’m not the joining type, they’ve given me a series to watch, so I will feel more informed…and closer to the organization and its work. And if I’m a shopaholic, I can go check out their store!

Whether they gave for the first time on an impulse or simply to support their friend, first-time donors are more likely to become second-, third-, and multiple-time donors if they take an action that makes them feel closer to your organization. Which of these things could you give your new donors?

What did you discuss around the dinner table this Thanksgiving? Yes, in 2020 it had to be a Zoom dinner table, but some of the difficult issues that divide your family members might have cropped up anyway.

How did you discuss those issues? Did you use the mute button to shut up people you didn’t want to hear? Or did you sigh and wish you knew how to say something constructive back to them?

Now, suppose a nonprofit organization you had previously given a donation gave you great advice on what to say at that table. I know I would be grateful for that advice. When I was thinking about donations again at the end of the year, I would remember it. And your donors would, too–if you were that helpful organization.

A guide on how to discuss immigration

RAICES always does a great job thanking donors, as we have seen before on this blog. My friend, nonprofit veteran Joan Hill, shared a thank-you letter that RAICES sent to her. It included this paragraph:

But the holidays can still bring up uncomfortable conversations that can be more challenging than usual this year. Many of us may be confronted with speaking up on behalf of those who continue fighting for their safety, like many in our immigrant communities.

We would like to support you in discussing issues close to your heart, like immigrant rights. Included in our thanks to you, we would like to share our Family Guide and an invitation to browse the RAICES Immigration and the Arts page highlighting the intersection between artistic expression and political action. Let this guide open the minds and hearts of conversations stuck in political rhetoric instead of the human impact.

The Family Guide is an easy download. Any donor who clicked on the link would find suggestions on how to discuss immigration issues with family members of all ages and all opinions.

That’s how RAICES is “giving back” to its donors–and at the same time, making them feel more grateful to RAICES. They’re rewarding generosity and creating loyalty at the same time.

What can your nonprofit do to help donors discuss the important issues that are the reason they gave to you in the first place? Whatever you can do, it will make them more likely to give again.